Create a Channel on the fly and add a Zoom instant meeting link to it.

Major Incidents can cause outages and disruptions to the services that keep your business up and running. It is thus important to minimize the resolution time for such Incidents. Collaboration plays a crucial role here and getting the right people to work through the incident is critical.

This sample workflow combines the use of the Slack and Zoom Orchestration apps to automate creating a dedicated slack channel for the incident, looping in the right set of people, creating a zoom meeting and posting the meeting link into the newly created slack channel.

The workflow will trigger when an Incident is created and will create a slack channel with the incident ticket id as the channel name for example inc-999, add the relevant people to it, so they can start working on the resolution of the incident over an instant Zoom meeting, whose URL will be posted into this new Slack channel.

To specify the Ticket ID as placeholders, we have to use liquid templates to convert the ID to a slack channel name acceptable format. Channel names can only contain lowercase letters, numbers, hyphens, periods, and underscores, and can only be 80 characters or less.

Liquid templates are used in this use case to change Ticket ID to the compliant format, this format is required during channel creation for Slack.

For example, a placeholder for the channel name will be, {{ticket.id  | downcase}}. 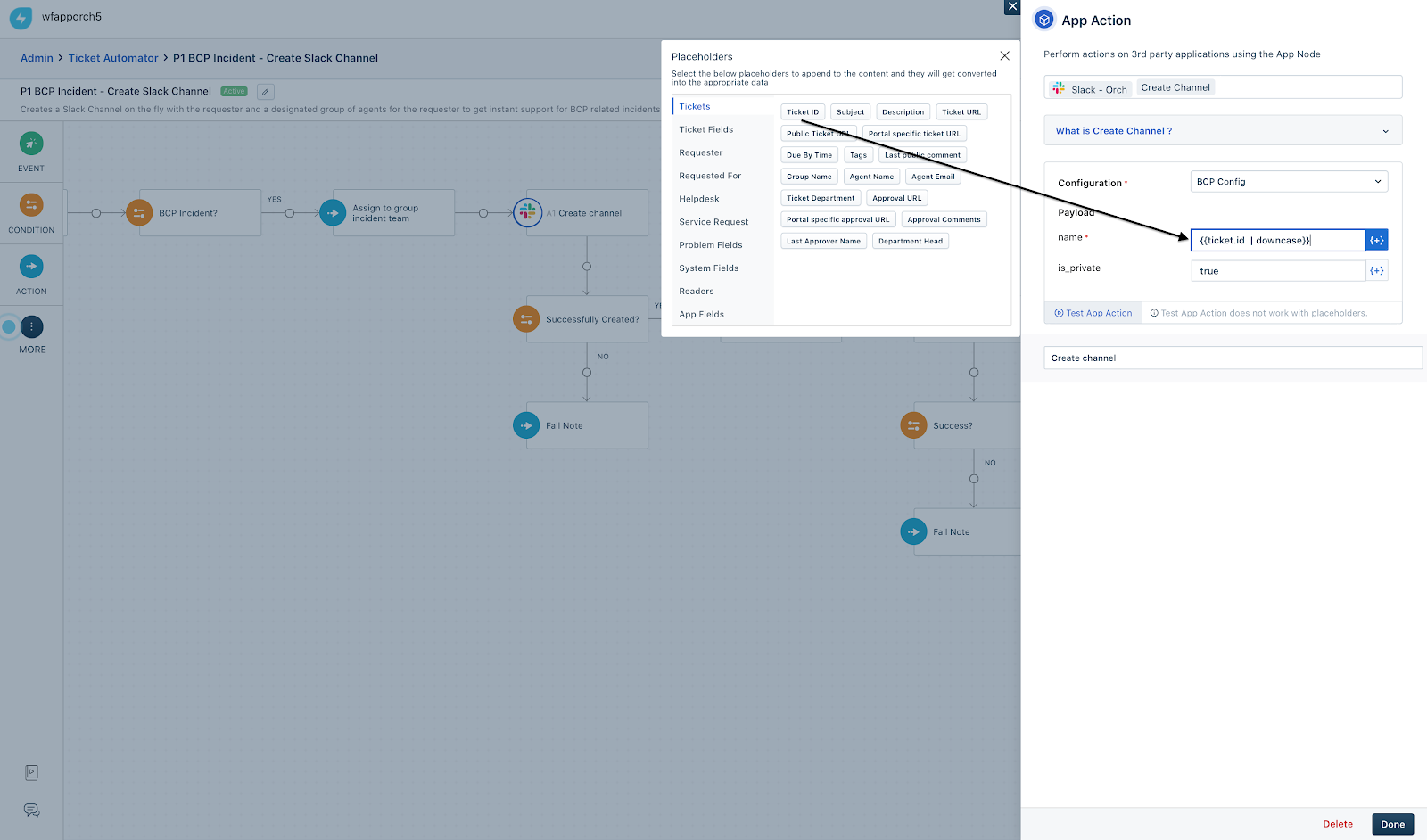 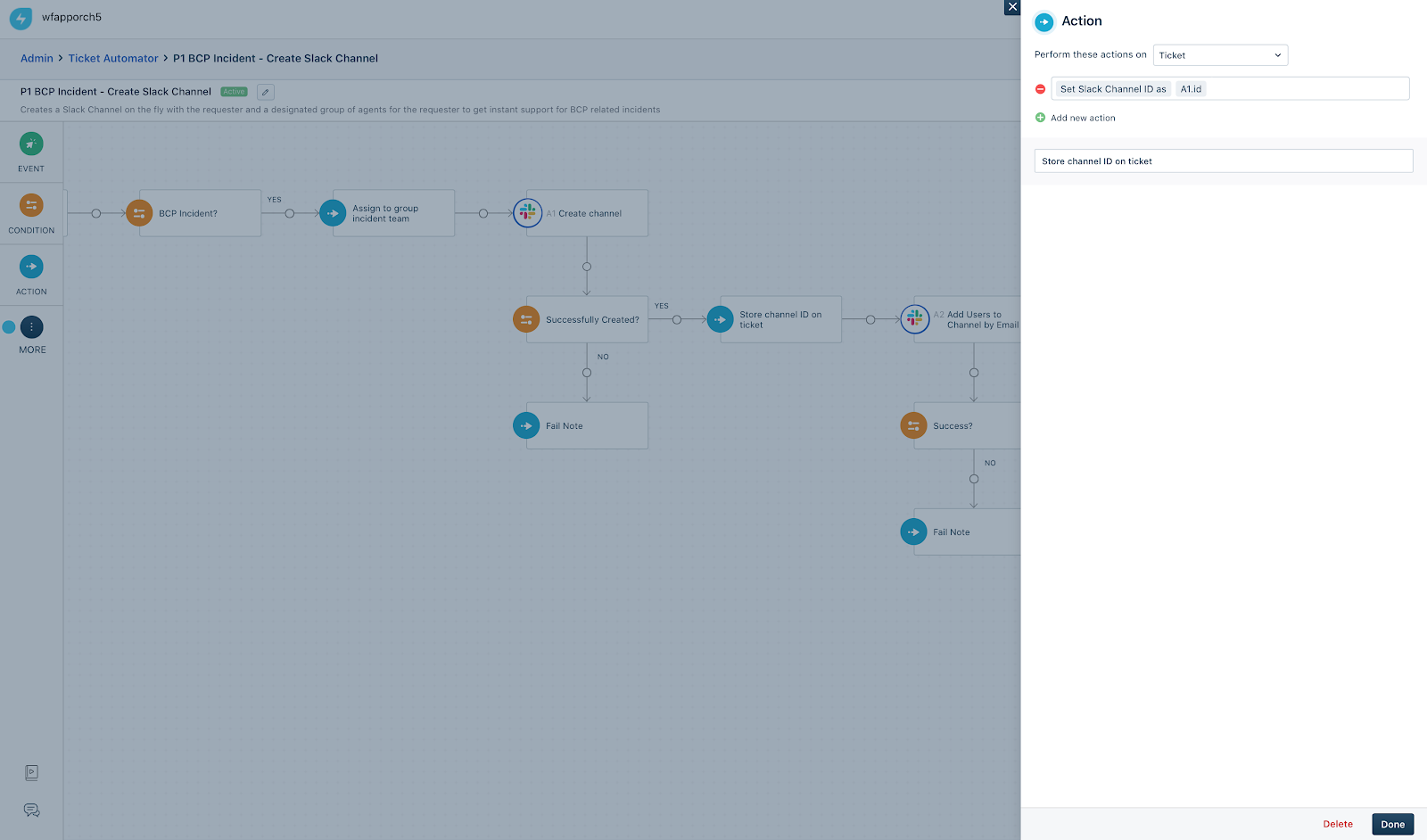 email: A comma-separated list of user emails. Up to 1000 users may be listed. This list of emails can be obtained from the requester, agent, a custom object via the reader node and so on. 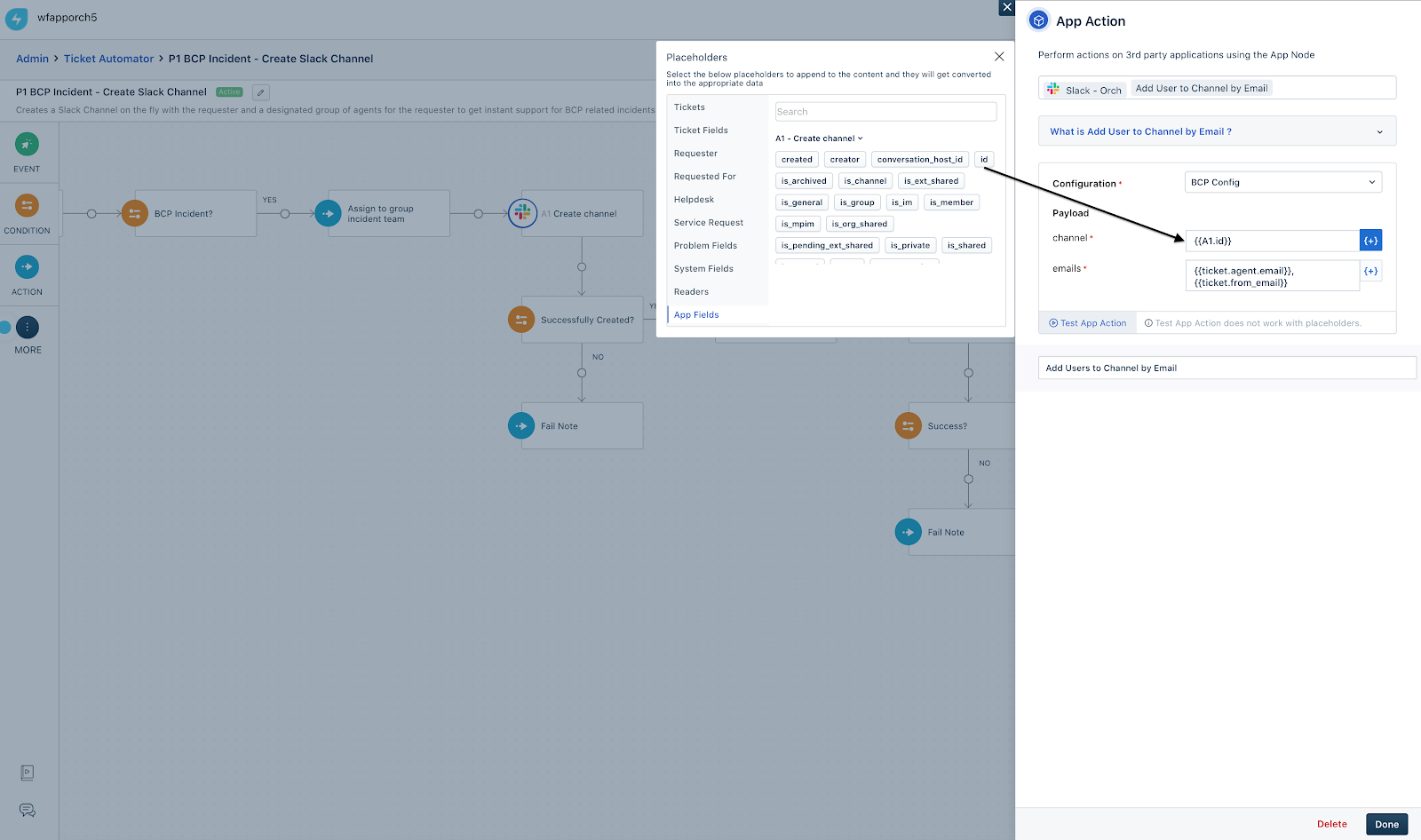 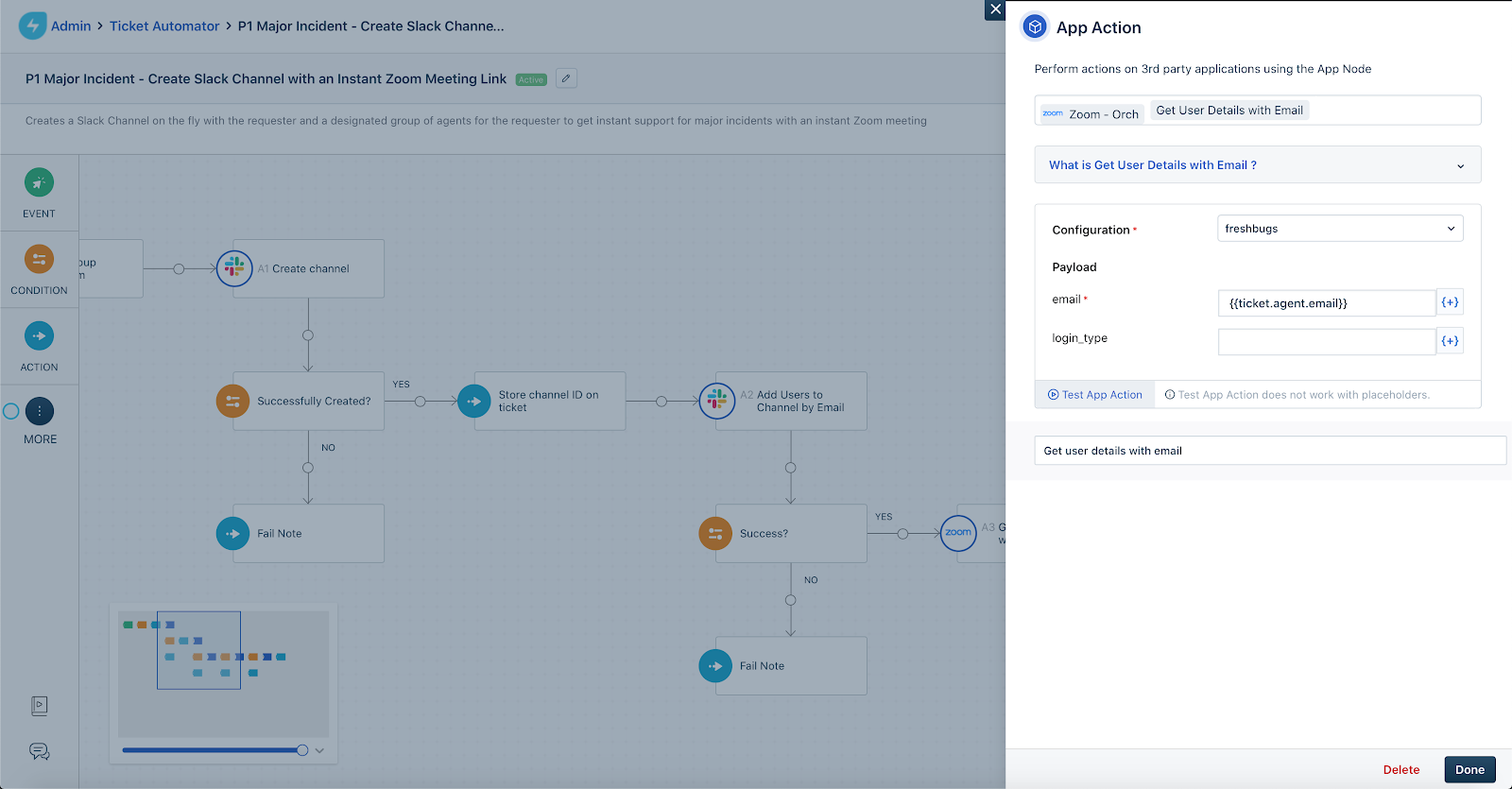 email - The placeholder for the agent’s email who is assigned to the incident.

9. In response to Step 8, we will get the user identifier of the agent in Zoom. Next, we will proceed to create an instant Zoom meeting by pulling in an App node with the following configurations 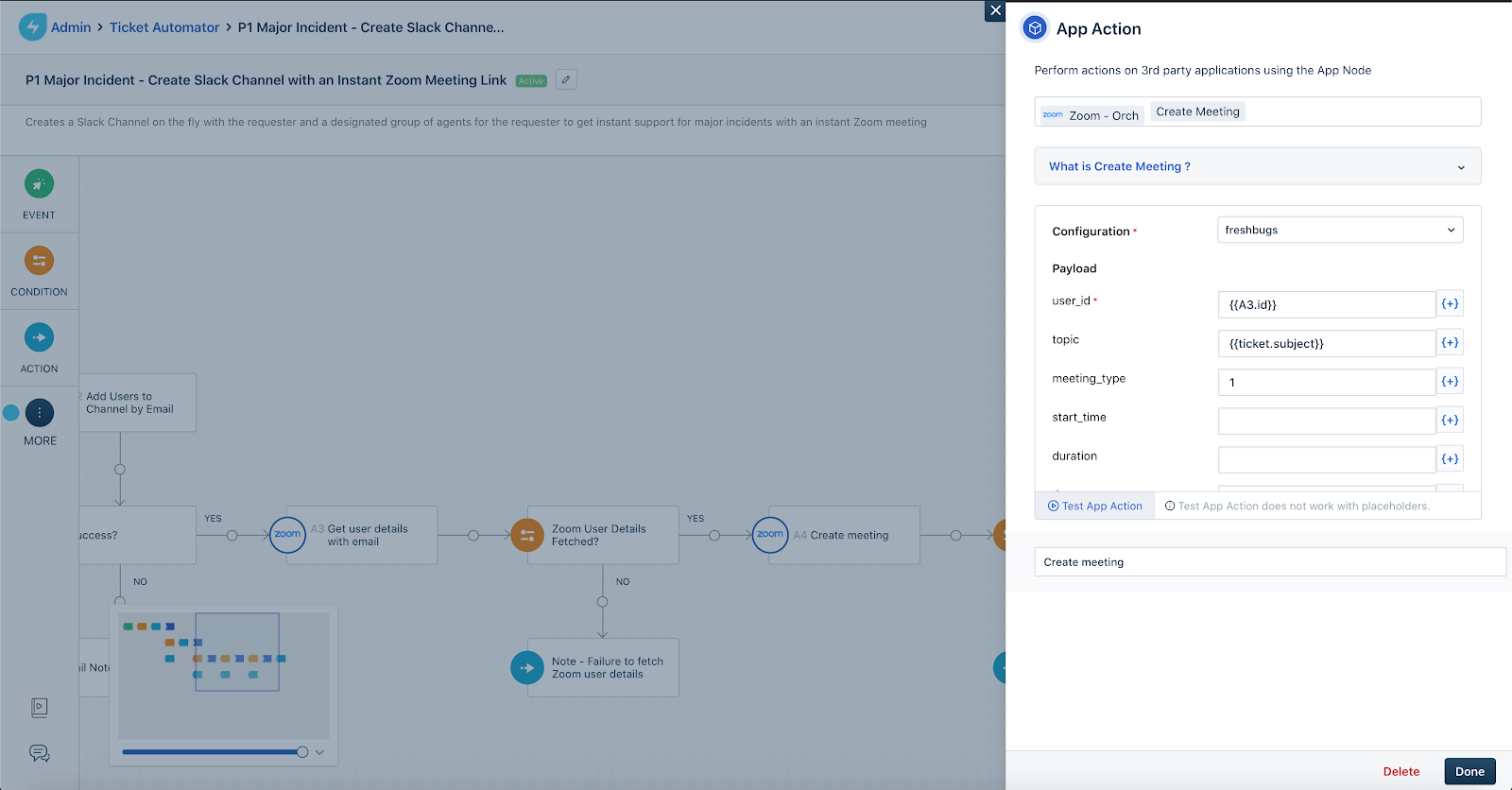 10. After the meeting is created we will now post the meeting joining URL to the slack channel we created in step 3 by pulling in an App Node with the following configurations 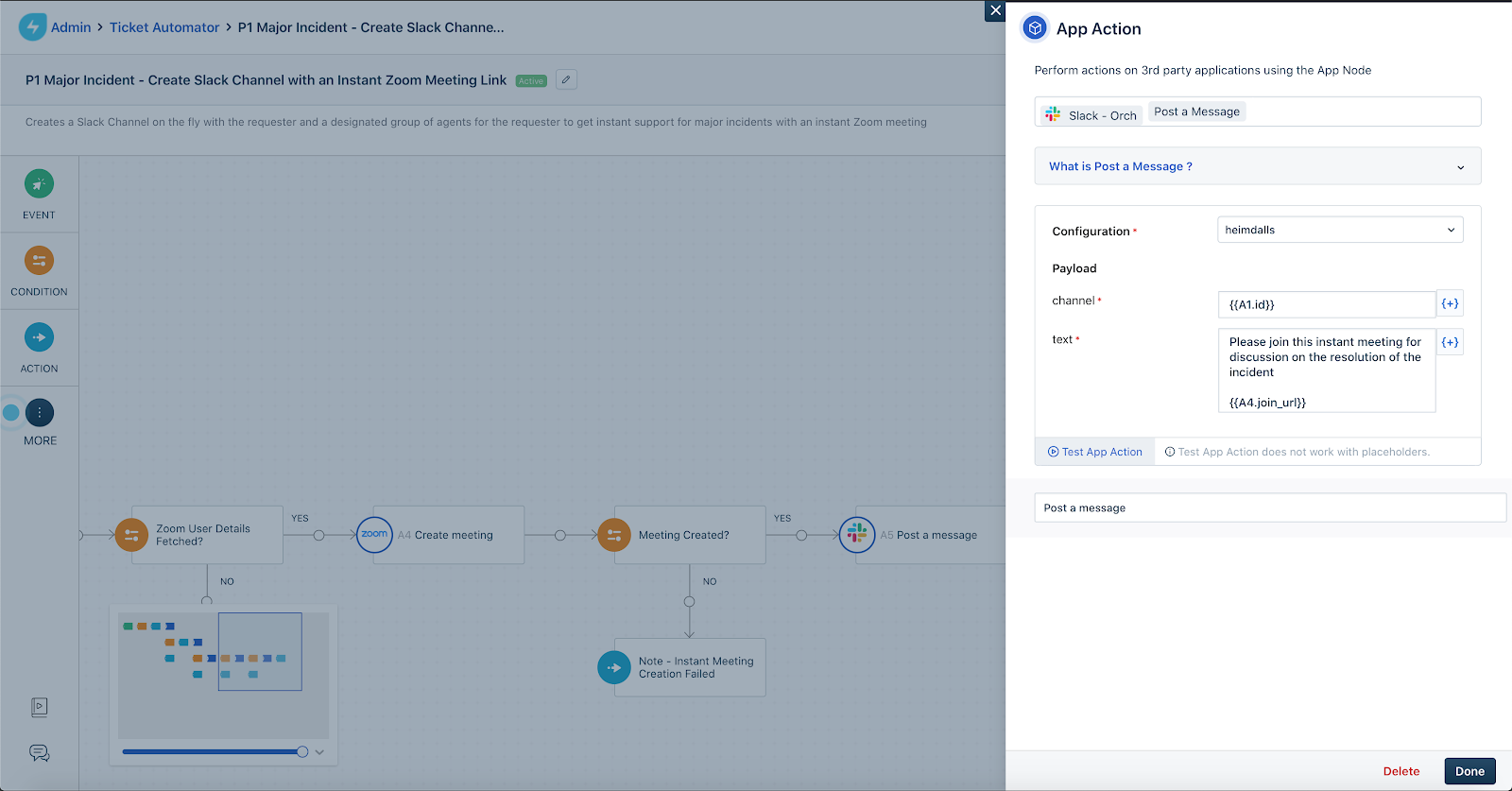