[Free webinar] 7 Pre-requisites of Incident Management for the New Era of Remote Work | 10 AM PST - 18th June, 2020 Save your seat

started a topic about 3 years ago

In order to ensure easy navigation and to de-clutter the portal, this upgrade will list the modules tickets, problems, changes, releases and solutions under the “ServiceDesk” drop-down tab while the modules inventory and contracts will be listed under “Assets” drop-down tab.

What does it mean?

This upgrade will ensure

Until now, all the features/modules were visible as tabs in the portal without being grouped. With the upgrade, modules such as tickets, problems, changes, releases, and solutions have been clubbed under ServiceDesk drop-down tab and assets related modules such as inventory and contracts will be displayed under Assets drop-down tab.

How does it work?

- Depending on your role and permissions, these changes will be visible if you have more than six tabs on your portal.

- For example, consider a situation where the following tabs were visible to you before the upgrade - Dashboard, Tickets, Releases, Reports, Inventory, Contract, and Settings. After the upgrade, since this situation exceeds the limit on six tabs, the Asset modules (Inventory and Contracts) will be grouped first and will be visible to you as Dashboard, Tickets, Releases, Assets, Reports and Settings.

Note that ServiceDesk modules (Tickets and Releases) will not be grouped in the above situation because the tab count does not exceed six after the Asset modules (Inventory and Contracts) were grouped.

I updated the agent role but there is no impact to the tabs. How can I delete a Tab for an agent ?

The grouping that you have implemented does not make sense in any Service Management framework or methodology (ITIL, COBIT,...)

The Service Desk is a function might include the Incidents and Service Request option (Tickets in Fresh Service) but never would include Problems, Changes and Releases. And include there the Solutions (Knowledge Database) it is just nonsense.

Please take a look of any ITSM suit in the market as reference and focus your design in creating an ITSM tool and not a hybrid which does not satisfy the minimum for a service management team.

Fresh Service has a lot of pros but your lack of a clear objetive with the design of the tool makes it a nightmare to work with it.

Luis I had the same initial reaction but failed to say it. You are so right - I thought it was so weird that these processes are grouped under "Service Desk" as well. Service Desk does not typically own the problem, change and release management components and that is how this now appears by grouping them. For me the bigger issue is less about the grouping and more about the reduction in navigation.

It's utterly worse than it was before. I appreciate progress but give an option to keep the old UI.

I hope no offense is taken to my feedback (below). Sometimes I really just think it is necessary to be completely honest to get people thinking about things a little bit more!

As a developer with UX and UI knowledge, I would like to say that I do not like this change at all, and I would never implement anything like this on any of my websites.  When tabs are used as frequently as these, a drop down ul is not the way to go.  You want to make frequently accessible items just a click away for your users, not a hover > move > click.  It may not seem like too much work to do that, and it really isn't, but it is inconvenient, and not user-friendly; just poor design in my opinion.

The only nice thing that I like are the keyboard shortcuts – I did not know that they were a thing until I read this post!

If you were going to do this to other, less-frequently accessed items in the navigation because you really felt as though you NEED to de-clutter this section, that would fine. However, these are the main tabs that we use, so why hide them!

What upsets me the most is that this probably took an entire team of designers and developers to implement this, which means wasted time [and money].  Aren’t there other issues that could be focused on?  I have been told that the WSYWIG text editor was going to be improved for close to a year and a half now, but still to this day, nothing has been improved!  Don’t worry, the update to the editor was pushed out for Freshdesk users, though.  I took it upon myself to modify the site’s stylesheet, though, so now my fellow agents no longer have to worry about formatting the font size and color only to mess up the entire document.

A UI change as unnecessary as this one (with all the unresolved bugs that people have reported) really makes me wonder where the priorities are at Freshservice! ...no offense.

Out of frustration, I developed a solution to this if anyone is interested…

There is an extension in the chrome web store that modifies the navigation back to the old way via jQuery that loads on document.ready(), and is completely harmless. I am happy to give you the source code if you don’t believe me. It is called “Freshservice Navigation Fix” if you use the search! Again, no offense, but it had to be done.

@ Jess - Off topic (sorry Freshservice) but my boss liked your solution, if you're interested in a job we at Aerocare Australia we would love to hear from you.

My linkedin is here https://www.linkedin.com/in/toddmurphy92 - I would provide a company email but this thread is public and I don't want it getting picked up by spam bots.

@jess YOU ROCK!! You just made everyone's day with this fix, thank you sooo much!! WOO HOO!

The fix Jess provided to make this work back the old way is awesome. After some time has passed I still think the navigation change is horrible and so does every single one of my peers. This makes usage much more clunky than it should be. I vote to revert the change.

What was the NEED for this change? Why not make it responsive, so when the window is smaller then consolidate the tabs. If there is plenty of screen space (as I'm sure is the case on most modern PCs/monitors then keeps the tabs available.

Still waiting comment from freshservice on reverting this unwanted change (note not one person has said "I like this") - I am becoming convinced fresh(service) may not actually care about service anymore. These forums are constantly one sided - customers only with very limited and spotty communication coming from freshservice.

If things continue like this customers will continue to lose faith in this product and ability to grow and improve. This is not a one off situation many feature requests and changes cause issues and rarely ever get addressed further after released. For example the change to BCC all announcements is horrible and months later still no comment on resolving this for non-MSP customers.

Terrible idea! Why do this. now I have to use the mouse to open the menu!!

Thanks for all the feedback.

We have been listening to the feedback on the navigation header changes and understand that we have inadvertently introduced some usability issues with this new header. We apologize for getting this wrong and for the inconvenience this may have caused to our users.

We are now working on a redesigned Left navigation menu that will enhance the usability of the product by keeping key actions just a click away, yet be more scalable as we add newer functionality to Freshservice. This lightweight redesign will also extend into other high use areas like the list page and detail page for Tickets/changes etc and make the product more usable. We believe this will also give Freshservice a cleaner, modern UI inline with other newer Freshworks products. We are targeting this for release soon and will keep you updated here on the progress.

Thank you for listening to your customers and admitting Freshservice made a mistake. This is the type of action of a company that cares about their customers rather than themselves and will create happy customers long term. We look forward to the updated interface.

Also, I would highly recommend reaching out to several of the customers in this thread to get their feedback on the new interface before it is released.

Venkat Balasubramanian - As Cazi said thank you for addressing this. It was pretty quiet on here for a while but in the end it will be addressed. I think posting a potential design here would allow for feedback and avoid another issue with design over function.

It would be helpful if there was a person or a couple people dedicated to supporting, managing and responding to discussions on this forum. This is a great place to have dialog with peers and Freshservice. Many vendors have moved to more community driven channels and strive to listen to their customers. This ensures everyone who wants to say something can and a balanced solution can be found. I still would like to see an option to BCC or not BCC when sending announcements for example and still waiting comment on that discussion. We really should not be forced to contact an account manager when this discussion board is the easiest place to share and discuss ideas.

said over 2 years ago

As promised earlier, we'll have a beta ready for the new design before the end of this week. The new UI delivers better readability (information hierarchy and fonts), one-click access to vital modules (left navigation menu), design consistency across various Freshworks products.

Here is a glimpse of the new design, let us know if you would like to try out the beta in your account. During the beta period the agents in your account can switch between the old and new UI with a single click. 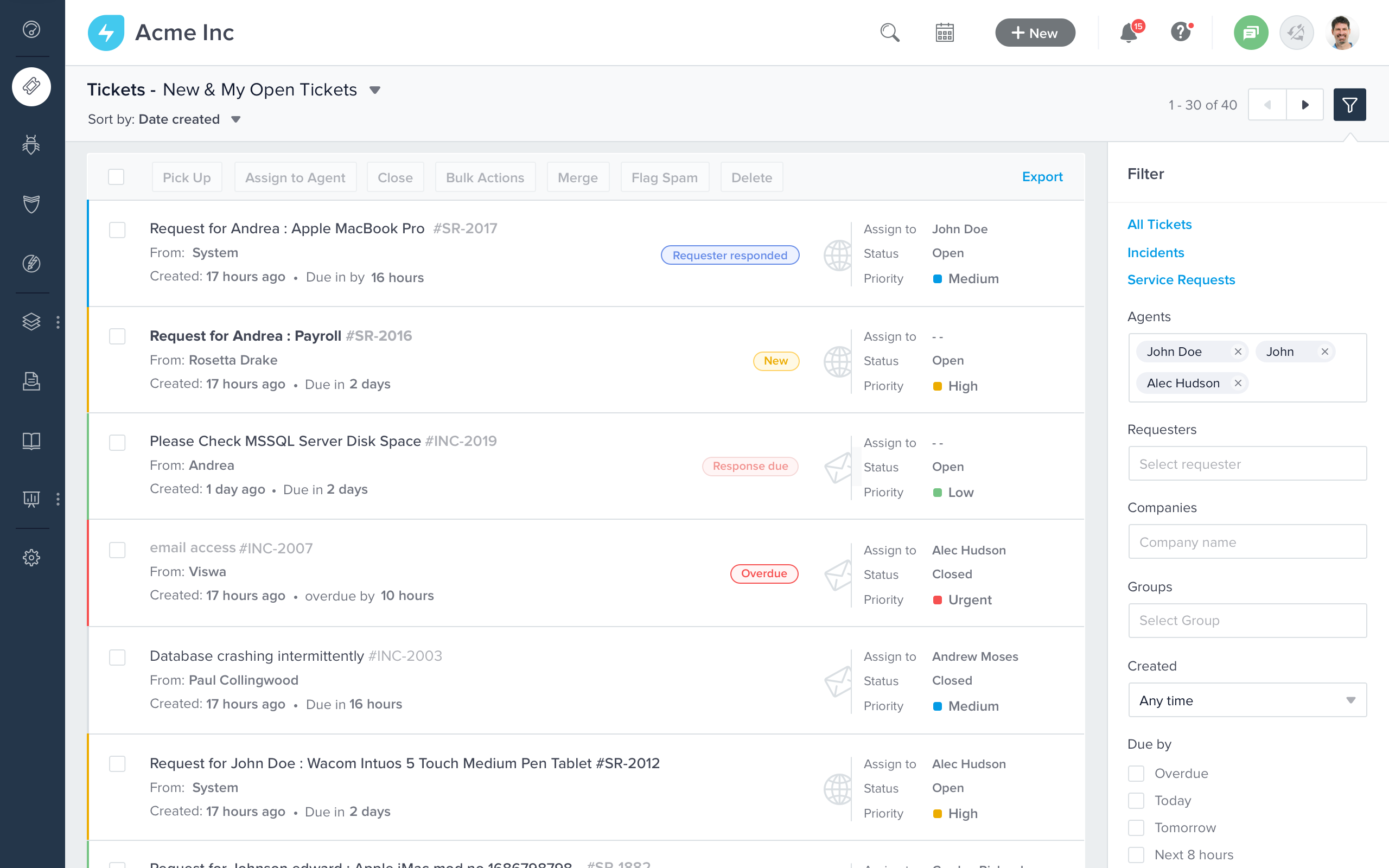 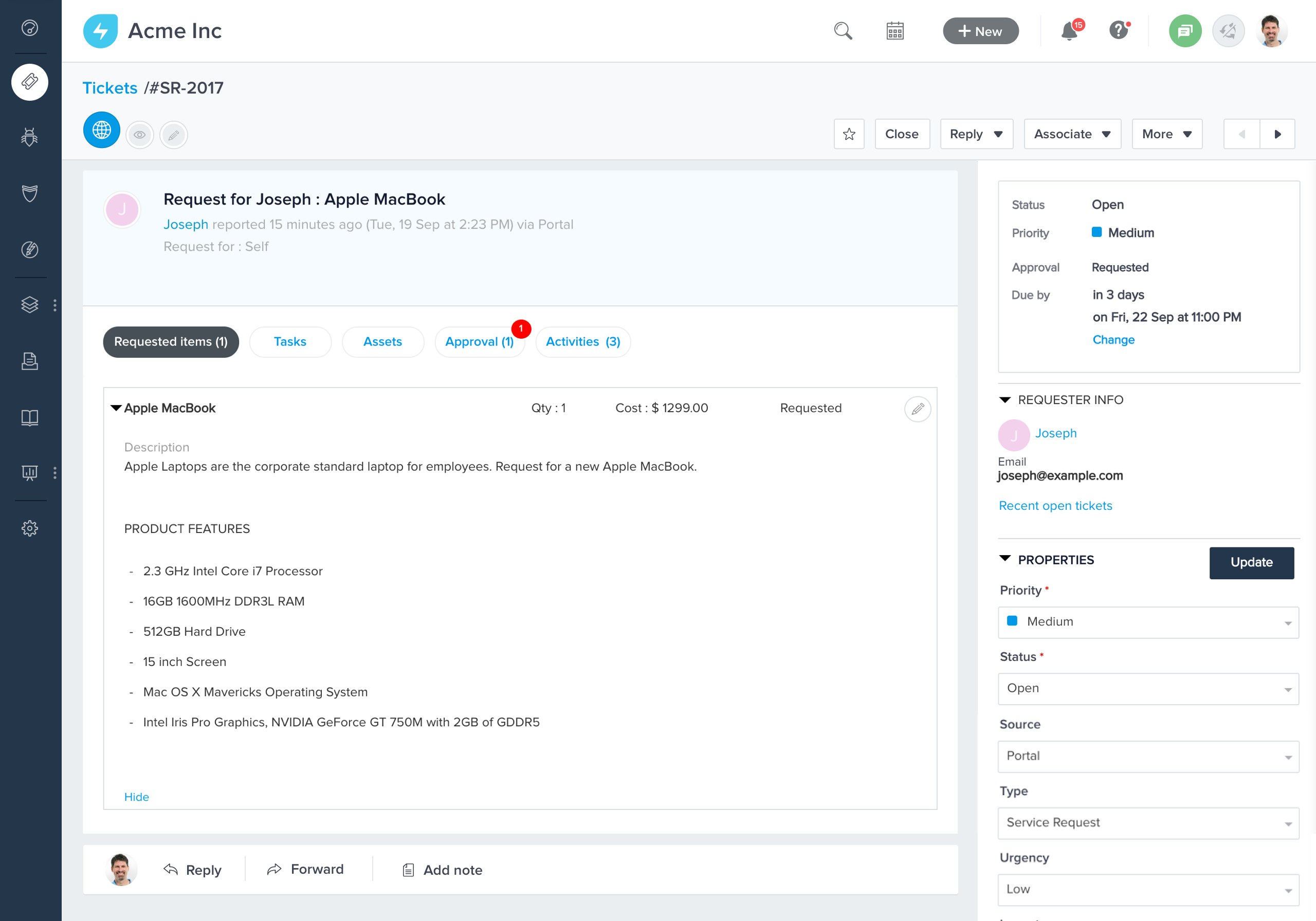