started a topic over 4 years ago

We dont need the default Asset Types on freshservice and it just make it more complex to our users. Is it possible to users to option to remove them? And when you remove them, please fix it so new (custom) asset types appear in products.

When you say "it makes it more complex to our users", do you mean that your users find it difficult to navigate the Asset Hierarchy to find the correct asset type they need? About the second request, can you help us with some examples of asset types for which you want to have Product association?

1) Now there is like 50(?) default asset types and we use none of them. We have made our own asset types from scratch. When agent has to choose type to the asset, he has 50 unnecessary types there and only 5 right ones.

2) Custom Asset Types are not listed when I am trying to create new products. Only default ones are found there.

Thanks for your response. This is very useful information for us as we plan for the future.

Can you let me know if you are managing IT assets such as Laptops in your environment? Or are you managing Non-IT Assets?

We do not have plans to remove all the default asset types in the near term. I am adding this to our long term plan.

About your second point: In case you are trying to manage IT assets, please add the custom asset types within the Hardware/Software section. You can then create new products for these asset types.

We are currently evaluating bringing the product association for custom asset types as well. Will update this space if we take it up for development.

The point is that when I want to add example Windows Server, there is like 23 boxes to fill addition to normal 10 boxes.

You dont need to remove them, just add delete button there so I can remove items that are not necessary.

been very little changes with the CMDB. would like to see more improvements and features come in the new year.

Hello,  We are new in this system, but, default asset types is not useful for us, because we are not IT company and we want have our own hierarchy of assets.

I think to solve the feature for both jere.vekka and FreshService would be to have the option to hide the default fields. This would allow users that are not interested in having those fields visible be able to remove them without actually deleting the fields. I am sure there are reasons FreshService wants to keep the fields. Those fields may be used in other ways that if a user deleted them would cause issues. So, in the end, we are really just looking at a UI issue and could be solved by allowing the ability of the user to just hide the fields they do not want to see without deleting them.

The other thing I wanted to see here would be the ability to add "product association" to a custom asset type. My scenario is I have Google Apps for Business and they charge $5 per user a month. But I can't make a product then associate that to a vendor and say the quantity is $5 per month per user and then when I created my custom asset type under Cloud I could not choose the product field as an option to associate my Google Apps product and vendor. This is really limiting because to use this system we are confined to only the asset type that you allow us to associate products with. Kind of a huge bummer...

I would think that implementing this feature as described would really add a whole lot of value to using this platform. Let me know what you think.

This highlights a usability issue in FreshService of excessively long dropdown menus.

Instead of scrolling down a long list of asset types, it should instead work as follows:

1. Select the Class of asset from a dropdown (Desktop, Laptop, Server, Printer etc.)

2. Based on the input from Step 1, a second dropdown should appear, which gives a more limited number of assets types.

Even better would be a tree view, where asset fields are automatically classed and classified.

It would help a lot of all the network devices under Hardware could be consolidated under a Hardware-Network asset type, however there is already another Asset type called Network.

Which is why it is vital that the asset type is split into Asset Class (broad category) and Asset Type (more specific category). 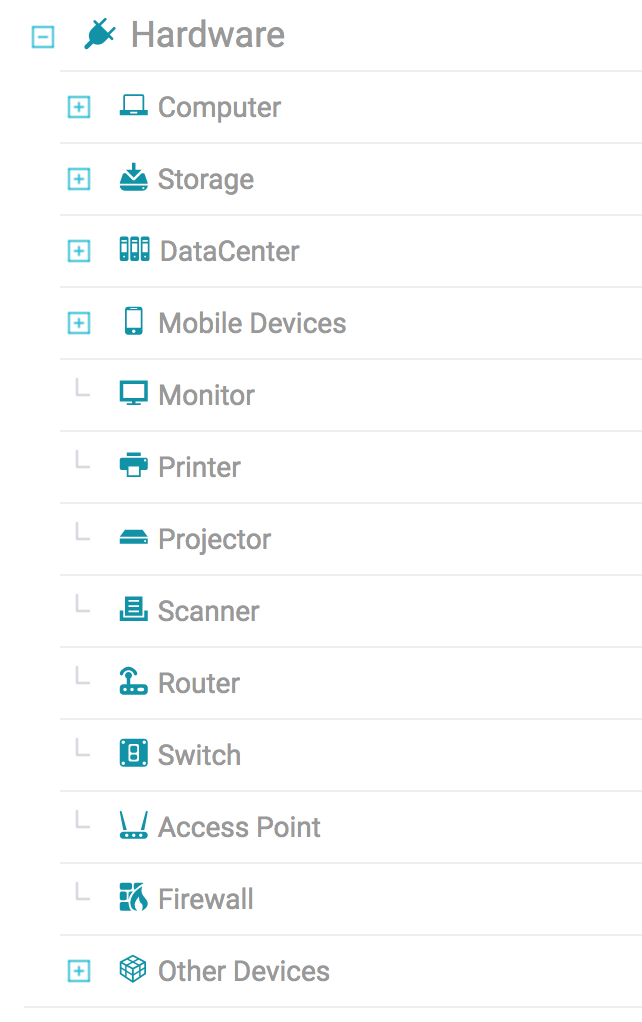 We also need to be able to delete the default asset types as well as being able to move asset types into different asset categories as needed.  Several reasons for this.

1.  We don't need/use all of them and so having them there adds clutter and potential confusion.

2.  Asset Types (default or custom) can not simply be moved into to other categories.  As pointed out above there are several default Network Asset Types that are not contained within the "Network" category but really should be.   Likewise... Monitor, Printer, Projector and Scanner should probably be listed under a Peripherals category or something like that.  Some things are in categories, some things are not...  it doesn't seem to be well thought out.

3.  The default assets apparently have what amounts to an asset ID associated with them within the backend database.  Even if you rename them it doesn't change that original "asset ID" to match the new name and so it is unavailable to use elsewhere.   Let me explain what I mean by this...

The default asset of "Tablet" is listed under mobile devices.  This doesn't work for us because we want Tablet to be listed as a computer since we primarily have Microsoft and Dell tablets that we consider computers, not mobile devices.  There is apparently no way to simply move that asset type up into computers and since I cannot delete it, it creates a mess that we have to try and manage/work around.  Even if I rename tablet to iPad for instance, it will not let me create a new asset type named Tablet under computer because it says the name is already in use.

This is maddening because we have a relatively simple and straightforward hierarchy of asset types but are struggling to get them created/arranged correctly within FreshService.  Please just give us the ability to move, delete and fully edit the default asset types.  I can see no good reason to have them locked down like this as it only causes problems for customers with the need to make changes.

Don't get me wrong, I applaud FreshService for trying to make it easier for new or inexperienced clients by providing these defaults as a starting point so they don't have to set everything up from scratch.  But in doing so they should not restrict more advanced users from customizing the service as needed to adhere to their unique environment.  If it's a one or the other approach, then it really makes more sense to allow the customer to start from a blank slate and configure it as they need, not how you assume it should be laid out.

One more issue which I'm battling to find a solution for with asset management, is the handling of Virtual Servers.

When I install the agent on a DigitalOcean droplet (virtual server), the FS Agent automatically classifies it as a Computer. It is then not possible to redefine the Asset Type as a Virtual Server.

(To compound the matter, there are only two Procurement Methods: Buy or Lease. No option for hosted service)

Bumping this thread up to get some more inputs from users who might have similar requirements. I have also consolidated the requests in this thread so far.

We are working on 1. Hiding the default asset types
The other requests are in our backlog and I'll post an update once we take up an item from this list.
P

I would agree that the Asset Type Categories are a complete mess and very poorly implemented. With any system like this I should have the option to sign up with sample data or an empty system. If I choose sample data I should be able to delete that sample data if I don't like/want it. I didn't get a chance to test assets much during my trial so I was actually shocked to recently discover that I can't delete them or move them to other parent categories where they make sense. I didn't think twice of the mess, I just thought "oh, I'll be able to clean that up later, surely it will just be one or two clicks to move Firewall under Networking". Nope, no can do.

Our current structure (with ~50 default asset types) has been designed to enable teams to quickly add assets without having to build everything from scratch. The types and the inherited structure also allows for sharing fields between different asset types.

However, I understand that this might not work for everyone, as you have pointed out. (I too would be frustrated if Wordpress did not allow me to move categories the way I want it). Having 100% control over the category structure is a fair ask. We are continuously tweaking and redesigning the asset capabilities based on your feedback.

To start with, we are working on adding the capability to hide the unused asset types. This, along with the ability to build custom asset types will provide greater flexibility in maintaining your asset structure just the way you want it.

We'll continue to work on making this experience better for you. Please keep sharing your feedback.