started a topic about 6 years ago
We should be able to mark a user as a VIP, and have any ticket from them given High priority. There is currently no way to do this, and I don't see any other requests for this although it's a very common feature in other systems.

I have tried to figure out how to do this with workflow rules, but since they stop after the first match it is not possible without creating every single rule twice.

said about 6 years ago

Couldn't you use a workflow and set the condition to match certain emails or department name and then set the priority to high? Not sure what you mean by it stopping after the first match?

said about 6 years ago
Not unless you make two copies of every rule. If you are familiar with how rules work, you know that the processing of any ticket or event stops when it meets the first rule that applies - it does not run through the whole list and apply ANY rule that applies. So, for example, if I have a series of rules to route tickets based on attributes to the right group, I would have to have one for VIP users and one for everyone else to accomplish this.

said about 6 years ago

Just thought I would be try to be helpful as it usually takes a period of time to develop new functionally and this seemed more urgent and you said there is no way to do this - which there should be. Rules should resolve your business requirements and provide value quickly even if they are a little more work on your end. Here is what I know and what we have done - it has worked for us thus far. We identify a requirement, identify the event that occurs and set the actions we want to perform in a rule based on that event. We realize rules are a one to many relationship (one trigger to perform one or many actions) and its not a many to many relationship if you will (no matter how many inputs-conditions there will be one set of actions as the output). So every now and then we have different conditions that require different actions which require additional rules. Also remember anything that already occurs will continue to occur and your really only handling exceptions when you add/edit a rule, so you should only have to create one rule for anyone who is a "VIP" and perform a status change/send email/other desired actions.

I had the same challenge, and have accomplished a pretty niffty notification system.
Here's how it works:

It has to be the first Dispatcher rule:

Here's the first part of the rule.
You DO want to ensure you're putting the requester's name in correctly.
Look at how they appear in the requester record to ensure a match. 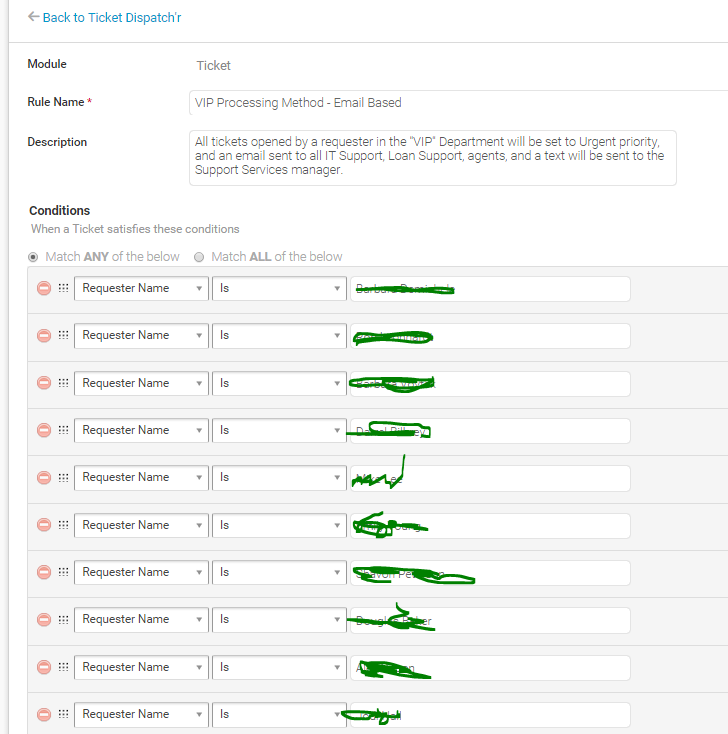 Here's the first part of the actions rule.

Second shot, including more of the notification text I'm sending:

I also wanted to do a text notification, which was a challenge to do.

I ended up burning an agent license to do this, as FS does not allow free-form email entry in the Actions rules. IE: you can select "send email" to several objects, but you cannot fill in the address you want.
To get around that, I made an agent with the email address for my cell carriers email-to-text address.
I tried this with a Requester, but you can't choose any requester, just the ticket's requester.
But - I think I also figured out a way to use an Agent without burning the $$ per month.
I made the Agent an Occasional; and, since it'll never login, it doesn't matter.

Finally, the rule adds a VIP tag I can report on: